"This is incredibly ambitious" 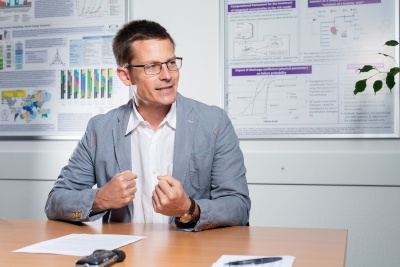 Every three years, the World Energy Council explores possible developments of the global energy system under different scenarios. Tom Kober, head of the Energy Economics Group at PSI and one of the lead authors of the study, explains what the individual projections mean and how global warming could be mitigated.

Since 2010, the World Energy Council has been developing these World Energy Scenarios and publishing them every three years. In three different scenarios, we describe the global energy system and provide a view of how it could evolve under certain framework conditions to 2040 and beyond. Ultimately, the scenarios should provide a better understanding of how the transformation of the energy system will play out and clarify the interactions among technologies, stakeholders, markets, and policies.

And what are the scenarios?

We start with three different scenarios that are designated by musical names, on the one hand to give each scenario a certain mood corresponding to the style of music, and on the other hand to express that in each scenario many different players are acting and that there are many interactions, variations, and facets. The three scenarios are called Modern Jazz, Unfinished Symphony, and Hard Rock. It is important for each of these scenarios that the conclusions are plausible and based on a data foundation as broad as possible including assessments insights of the members of the World Energy Council and other experts.

What, for example, is included in Modern Jazz?

This scenario places an emphasis on agile markets with a strong dynamic of technical innovations and so-called digital disruptive developments. The latter means, for example, that consumer behavior is changing drastically and by leaps and bounds as a result of digitalization. This could express itself in a rapid increase in the purchase of electric cars. But it can also mean that innovative technologies develop faster and prevail in the market because they are significantly more effective than those used to date. Above all, in the Modern Jazz scenario, the markets can develop relatively freely. Unlike in Unfinished Symphony, for example.

Which proceeds from which framework conditions?

In this scenario, governments have a significantly greater influence on the development of the energy system, for example through laws, framework conditions that are stable over the long term, and subsidies. So this scenario has more emphasis on climate policy decisions and other sustainability aspects. In this scenario, different regions of the world are working together in a coordinated way to reduce emissions of greenhouse gases, increase the efficiency of the energy system, and promote new technologies. In Unfinished Symphony the individual participants act much more cooperatively.

And the third scenario?

Hard Rock assumes, for example, a lower level of economic growth than the other two scenarios. The individual states and their economies are more self-reliant, resulting in fewer cooperative measures and less trade. In Hard Rock, the security of the energy supply is of particular importance, and environmental aspects – unlike in Modern Jazz or Unfinished Symphony – tend to be more in the background here. Due to the rather low level of international cooperation, new technologies experience less innovation in this scenario, and the players tend to focus more on their own regions and pay more attention to keep the existing economy running.

Are there other general developments that apply to all three scenarios?

There is, for example, the increasing importance of electricity. Compared to 2015, where electricity had accounted for 17 percent of final energy consumption worldwide, by 2040 this share increases to 20 percent in Hard Rock and 31 percent in Unfinished Symphony. Especially in Unfinished Symphony, electricity is an important component in the so-called decarbonization of the energy system, particularly in the energy demand sectors. Thus, the emission of climate-damaging gases such as CO2 will be significantly reduced by providing heat and mobility not with fossil fuels, but by technologies based on electricity or low-emission energy sources. Of course, this presupposes that electricity is produced largely at a low carbon level. Accordingly, we see in the Unfinished Symphony Scenario an increase in worldwide electricity generation from renewable energy sources to 43 percent by 2040. But also, on a global scale, nuclear power plants and power plants with CO2 separation and subsequent reuse or storage also make important contributions. Typically, this requires suitable framework conditions on the energy markets.

Are there general developments for Europe?

In addition to expanded reliance on renewable energy sources and an increase in the importance of electricity, we see good potential for energy savings in the consumer sectors, which ultimately leads to a decline in final energy consumption. Important energy technologies include heat pumps as well as electromobility and other electricity-controlled applications. With regard to the reduction in final energy consumption, Europe differs from Asia where, on the one hand, growth is stronger, and on the other hand fossil fuels continue to have a greater importance. Because of the strong growth in Asia, the largest investments in the energy system are needed there. In the coming decades, about 50 percent of worldwide investments for the provision of energy need to be made in Asia.

Could it be said that the current global energy system contains elements from all three scenarios?

Precisely. We currently see elements of all three scenarios, with distinctive regional variations. There are very dynamic markets with a lot of innovation, for example in the field of smart cities, where intelligently networked consumption and production management systems and storage technologies are used – that would be Modern Jazz. I see Unfinished Symphony where coordinated energy policy measures are implemented, such as transnational emissions standards for vehicles or comprehensive and effective trading systems for emission permits. But you can also observe Hard Rock tendencies – especially where free trade is restricted and protectionism supersedes other goals.

The World Energy Scenarios relate to the future. That is always fraught with uncertainties. What are they?

In general, an important criterion for further development is the availability of capital. If no investment capital is available, certain developments will not happen, and certain structures in the energy system will not adjust. This is particularly important when high capital cost technologies with moderate operating costs are expected to replace technologies that have relatively low capital costs but high operating costs. This is often the case when emission-intensive energy applications based on oil, gas, or coal are supposed to be replaced by low-emission technologies. Unless the appropriate funding mechanisms are available, the limited capital will be used to cover the operating costs of the existing system instead of investing in new technologies.

The report assumes that none of the scenarios will comply with the goal of the United Nations Climate Change Conference in Paris. According to that, the warming of the atmosphere should be kept below two degrees Celsius. Isn't that pessimistic?

After all, with the Unfinished Symphony scenario we are on an emissions path that leads to atmospheric warming of just over two degrees Celsius. If we want to get closer to restricting global warming significantly, say to a maximum warming of 1.5 degrees, we would need to bring down energy-related greenhouse gas emissions to zero by 2060. This is incredibly ambitious. It would require at least 15 percent more energy efficiency than in Unfinished Symphony and more CO2-free electricity production. We would even need technologies that allow CO2 to be removed from the atmosphere. This could be done, for example, with energy from biomass that is used to generate electricity, with the resulting CO2 then being stored. That could even compensate for greenhouse gas emissions from other areas such as agriculture.

Why is PSI so heavily involved in the development of the world energy scenarios?

Over the past few years in the Laboratory for Energy Systems Analysis at PSI, we have been building and continuously enhancing a computer-aided model of the worldwide energy system and applying it to the world energy scenarios. In essence, it is a computer simulation that helps us quantify the complex circumstances behind the scenarios. This model – the Global MARKAL Model, or GMM for short – maps the current structures of the energy system with its interactions as well as a multitude of possible future options for the energy supply, from resource extraction through end use, that is, the whole supply chain. Accordingly, long-term developments of the energy system can be seen, whereby we analyze both the target points of a development and the transformation process leading to the new structures. GMM is based on a plenty of technical and economic data, allowing us not only to make qualitative predictions, but above all quantitative predictions based on concrete numbers.

Dr. Tom Kober, head of the Energy Economics Group in the Laboratory for Energy Systems Analysis at Paul Scherrer Institute and one of the lead authors of the world energy scenarios, analyzes the global energy system and develops projections for possible future developments.

A current version of the World Energy Scenarios is published every three years. It is prepared by members of the World Energy Council, Accenture, one of the world's largest management consulting, technology and outsourcing service providers, and the Paul Scherrer Institute PSI.